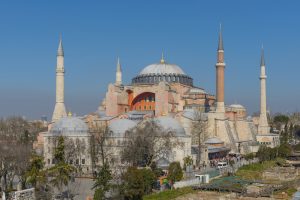 When the ancient Romans moved their capital from Rome, Italy to what is now Istanbul, Turkey, they continued to value the idea of a dome as a symbol of heaven, the dwelling place of the ruling god. The domed church of Hagia Sophia in Constantinople, modern Istanbul, evolved from the Roman tradition and daring experiments in spanning huge volumes by using new materials and forms, to emphasize new religious, social, aesthetic, and technological contexts of the domical structures. We will especially highlight the life of Hagia Sophia as a Christian church and a Muslim mosque.